Daphna Joel is one of my favorite researchers in the neuroscience field (along with Jordan-Young, Fine and a set of others – almost all of whom are implicitly supportive of trans people, the rest haven’t voiced any opinions or comment on trans people). But unknown to many is that she also does research specifically on trans and nonbinary individuals.

Just by visual inspection we can note individuals that identify as men that feel more like men than women and vice versa. There is also some level of bigenderism among several individuals. We can easily point out that a cis-trans binary focused on identification as a gender not typically associated with the gender assigned at birth is incoherent because it obscures the reality of identification: many “cis” individuals would be classified as bigender under nearly all definitions of bigender, and many would be classified as agender. These gender identities are very commonly considered “trans”. Even more, there are several cis individuals who have feelings that contrast the gender they were assigned: a woman feeling much more like a man than a woman. 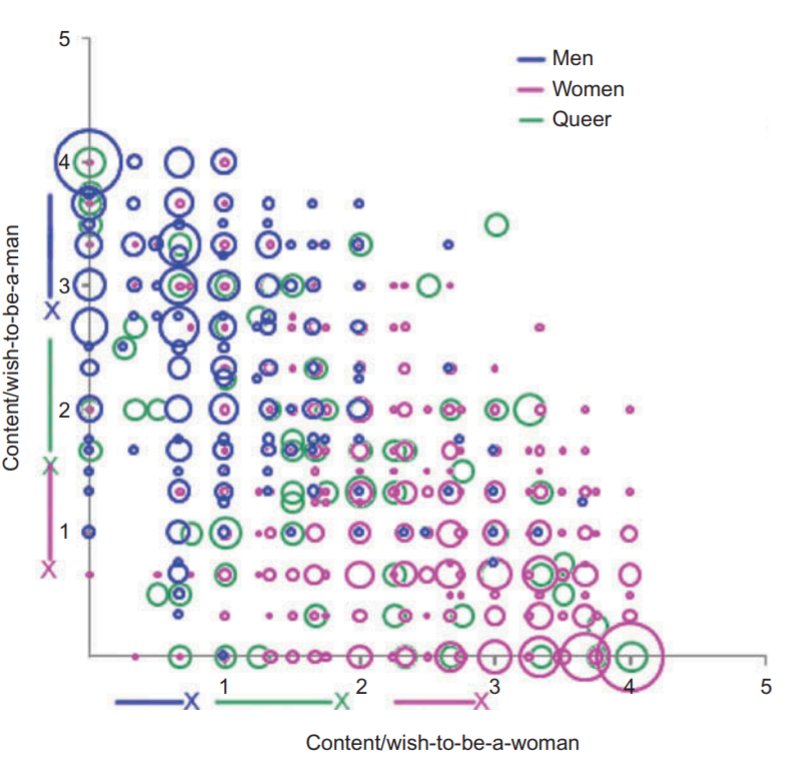 While ‘qu\r’ individuals obviously had the most non-normative identities, substantiative numbers of supposedly normative individuals wished to be that of the ‘opposite gender’. If we’re operationalizing gender dysphoria as such, which many people in the trans community do, then that begets the conclusion that cis people can be dysphoric (something I’m perfectly willing to accept despite odd pushback).

Taken together, our findings suggest that dichotomous gender categorisation does not reflect the complexity and multiplicity of gender experience. Rather, our study provides supportive evidence to non-binary theories of gender (e.g. Corbett, 2009; Dimen, 1995, 2003, 2005; Goldner, 1991, 2003; Harris, 1991, 2005) that perceive gender as fluid rather than dichotomous, and consider all human beings, not just gender nonconforming individuals, to have complex assemblages of gendered selves (Harris, 2005).

While I appreciate the concession that cis individuals can experience dysphoria via discontent with ones sexed body, the dismissal of alternative definitions of gender dysphoria is somewhat annoying: I’ve seen many individuals attempt to reconcile ‘all trans people have dysphoria’ with the acceptance of a variety of trans individuals by (re)defining dysphoria as the wish to become another gender. The research shows this method is untenable in maintaining a coherent cis-trans binary.

Some interesting results from the literature (which confirm the results of the study) which seemingly contradict Kay Brown’s claims that gender dysphoria is more common in “male” individuals. I suspect that this is not a result of intrinsic prevalence of being trans among the populations, but rather a product of societal norms (my post about butches and ftms could be enlightening as to how identity can obscure prevalence as well as my unsupported estimate that more trans men live as butch women than trans women live as feminine men). Regardless, there needs to be a lot more research into prevalence of gender dysphoria and trans identity among various populations.

Our results also do not support the prevalent view in contemporary psychoanalytic and critical theories that individuals have a binary sense of gender and that the heterosexual– homosexual binary constitutes, stabilises and naturalises the male–female binary

And while I adore this study, Joel et. al completely misrepresent Butler’s point here. It’s to be expected given that Joel is a neuroscientist and Butler is a continental philosopher who uses some complicated language and terminology that requires copious amounts of references to comprehend completely. Correlates do not disprove Butler and co’s claims about how sexuality and gender are produced by society, the discourses that surround the identities and how closely the two are related. Even more, Sedgewick and Butler would very likely not say that individuals simply “have a binary sense of gender”, their claims have much more to do with the discourses that surround gender than introspection. Butler’s work almost specifically breaks down the idea that binary gender is universally present. Despite many ‘normative’ individuals having decidedly ‘non-normative’ identities, they continue to uphold a societal system of binarism documented time and time again. From a more logical standpoint, the binary between homosexuality and heterosexuality implicitly accepts the idea that there are two mutually exclusive and immutable genders that are universally present: homosexuality for same and heterosexual for different. Even more, Butler more specifically claims that the heterosexual matrix naturalizes the male-female binary through its application of heterosexuality to everyone until it is stated or shown otherwise. Despite my adoration for Joel, it seems she is out of her depth when she wades into the philosophical feminist literature attempting to disprove descriptive statements about culture and discourse using individual representations of internal gender identity.

Jacobson and Joel recently published two studies relevant to our inquiry into the nature of gender identity. An Exploration of the Relations Between Self-Reported Gender Identity and Sexual Orientation in an Online Sample of Cisgender Individuals. and Self-Reported Gender Identity and Sexuality in an Online Sample of Cisgender, Transgender, and Gender-Diverse Individuals: An Exploratory Study.

The first notable thing that I want to highlight is not exactly related to gender identity or gender politics, but rather feminist politics and how MRAs (men’s rights activists) portray feminism politics. Table 2 indicates that 76.2% of women say they hold feminist views, 20.6% say ‘to some extent’ and only 3.2% do not. This is mirrored among men with moderately more negative reactions: 48.5% yes, 39.6% to some extent and 11.8% no. Contrary to the MRA narrative that ‘only 16% of women are feminists’, it seems as if a much larger portion are. Admittedly, this is not a representative sample and should not be extrapolated to the population as a whole, but it’s an interesting result that bears repeated testing with the same/similar questions.

A cross-cultural replication of the 2013 study, Joel again shows that a view that only trans people identify as genders other that they were assigned at birth is untenable and empirically false as a basis for cis-trans distinction.

The percent of binary individuals ranged between 8.8 and 40%, depending mostly on sexual orientation, with the highest percentage of binary individuals found in the exclusively heterosexual and exclusively homosexual groups, which did not signifcantly differ (p=.80), and lower percentage in the mostly heterosexual, bisexual, and mostly homosexual groups

The results also indicate that strict gender roles marginalize a majority of the population of cishet individuals. There may be correlations between identified gender and gendered performance, but that is definitively a product of social norms that are produced and reproduced by gendered performance and there exists a large population of individuals who defy these norms.

Their summary of how the findings impact discourse on gender identity are good, but the bold part needs a large asterisk. The fact that sexual orientation and gender identity are coherently separate constructs is definitely a culturally specific phenomenon. In some cultures, gender and sexuality are not exactly considered distinct (see Thailand for example with gender identities and sexualities almost being considered identical in common parlance – which could have confounds when one looks at the Individualism vs Collectivism Hofstede scale and how it relates to the proportion of ‘nonhomosexual transsexuals’ in a country). In others, they’re interrelated in complex ways. Even more, the construct of sexuality is temporally and spatially-specific: cultures like that of the ancient Greeks and Romans viewed homosexuality not as a man loving another man, but a man being penetrated by a man – the act of penetration was not denigrated or deemed the same way as being penetrated was and moreover was not part of the same category. Foucault’s History of Sexuality is especially relevant on how sexuality and power are interconnected. And while gender identity and sexuality can be considered distinct constructs in the most abstract sense, we must also take note on how closely interrelated and intertwined one’s experiences of sexuality and gender identity fit together.

One of my many gripes with the trans community (unfortunately transfeminists have many) is the insistence on telling individuals who have cross-gender feelings and urges that they must be trans in some fashion, that ‘only trans people want to be the “opposite” gender’, that ‘cis people don’t obsess over looking like the “opposite” gender’. It reifies an arbitrary distinction between cis and trans and while self-validating and potentially externally affirming, problematically erases the experiences of cis individuals who do in fact experience the feelings that many claim they don’t. Here it is in writing, wanting to be the “opposite” gender/sex cannot be the operationalization of gender dysphoria. Gender dysphoria contemporarily can be considered a polysemic construct rather than a homogeneous term, perhaps best represented by a Wittgensteinian family resemblance (see my article on ftms and butches on family resemblances and how they relate to gender).

More generally, our study adds to a growing body of literature that challenges dichotomous conventions within the science of gender and sexuality (for a recent review, see Hyde, Bigler, Joel, Tate, & van Anders, in press).

Most excitingly for me is my discovery that Joel is writing a new paper that reviews the research on gender and sexuality.

We can note that among many sexuality subgroups, men have higher scores on the ‘wish to be the “other” gender” item, and that both items varies non-monotonically with sexuality.

Again visual inspection yields individuals that dislike their sexed body and want to have the body of the “other” sex. Furthermore, the individuals are notably not exclusively homosexual.

The graph from the discussion on gender roles above.

There are numerous other little important results that if I were to include and discuss them would make this post much longer than would make it useful or readable.

Jacobson and Joel released another 2018 study, Self-Reported Gender Identity and Sexuality in an Online Sample of Cisgender, Transgender, and Gender-Diverse Individuals: An Exploratory Study. It used a European-American sample of individuals rather than the original Israeli sample of the pioneering study, compromising a cross-cultural replication. It also introduces terminology not used in the pioneering study; “gender diverse”. I appreciate the movement away from ‘qu\r’ and while I think it’s the best solution, more could be done to clarify that genderqueer/nonbinary people can be transgender.

Again, we note large numbers of cis individuals that feel like neither gender or as both genders, as well as trans individuals having higher rates of this (we see all of these values are quantifiable and almost all are significant in Table 2). 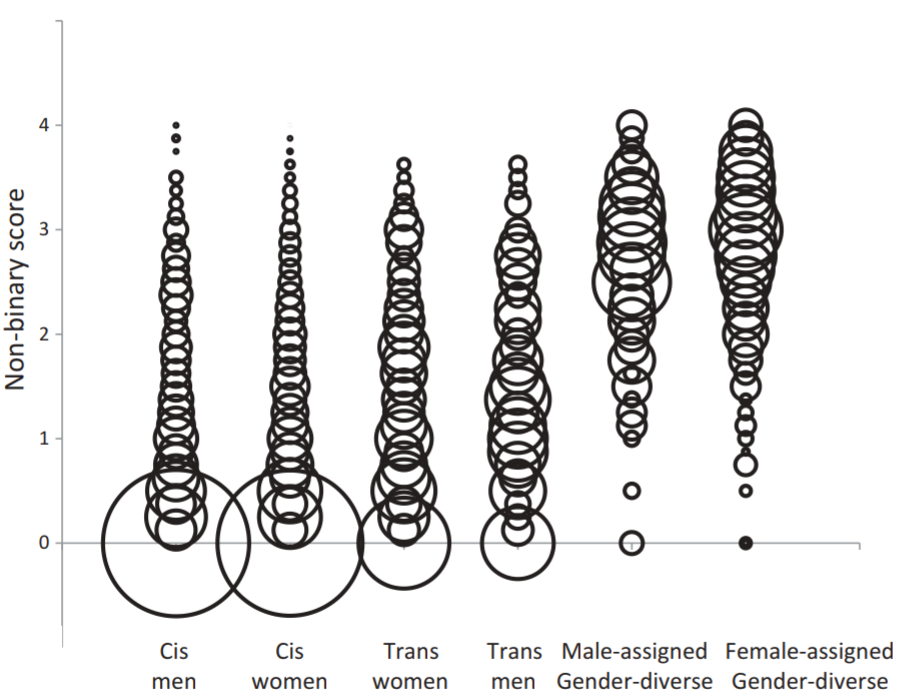 While we can easily note that trans and gender diverse individuals have much higher nonbinary scores on average, the range of these scores is almost identical among the 6 groups. This precludes the idea that nonbinary scores can, in every case, discriminate trans/nonbinary individuals from cis people (without forcefully categorizing individuals to best fit preconceived notions of the categories that best fit ones’ ideology). 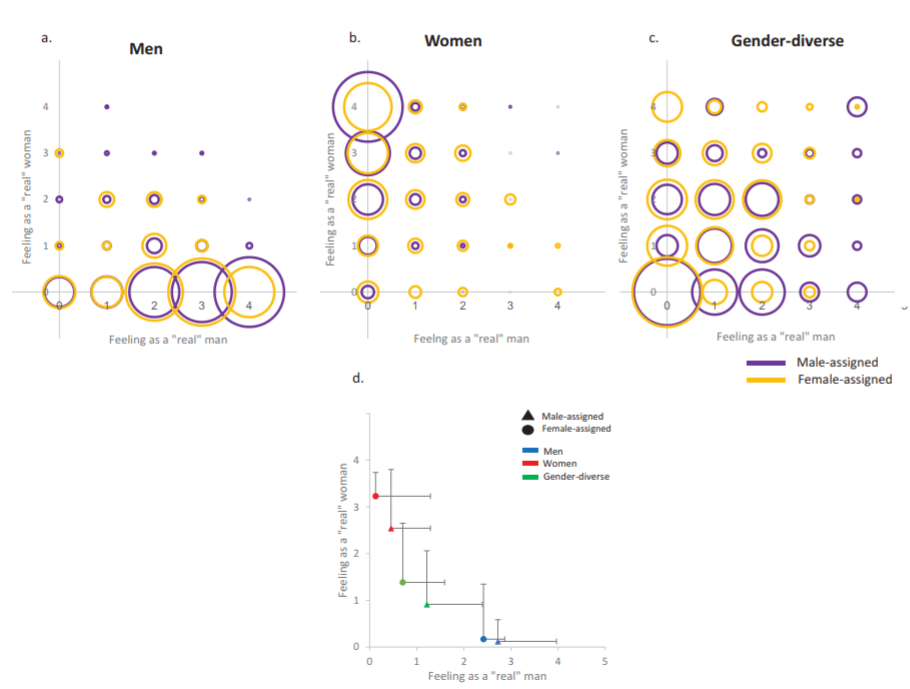 And yet again, cis women and cis men have higher feelings of validity about their actual gender, unsurprisingly. Unfortunately this was not broken down by sexual orientation, but it’d definitely be a great exercise to see how homophobia/lesbophobia/biphobia/etc affects conceptualization of one’s gender identity as valid or invalid.

A few of these were from the studies themselves, but I think should be highlighted for their specificity of the topic